Home decorating has always been a passion of mine.   My husband and I built our current home in 1989 and, except for  building a deck off of our kitchen immediately after we moved in and, of course, landscaping, occasional painting, it remained pretty much untouched until about 2006 when we contracted a major re-do on our landscaping.

I began to view home design/decorating/renovation  as an actual  hobby when I realized that I almost always have some sort of a project going, big or small.   And if I’m not actually in the midst of completing a project, I’m thinking about it.   We started planning our first major indoor reno about fifteen years ago.   That was when our son and daughter in law got married and we realized that we wanted a place for eventual grandchildren to play in when they weren’t outdoors.    We had a very large vacant basement that ran the full length and width of our house.    This space houses contiguous areas that now include a walk up wet bar, a play area for the grandkids, a TV viewing area and poker table/dining area.    It also includes three enclosed areas:   a half bath in the main basement area, an office, and a utility area.

We found our contractor who would help us to realize our vision for the basement space and we were off to the races!  We found this contractor through referrals from friends and neighbors who had used them and were very satisfied.   We were so happy with his work that we used him for all of our other projects throughout the years.    And actually, when I retired, coincidentally he retired!   We also found a custom cabinet maker who has redone all the cabinetry in our home.

Then about 10 years before I retired, I decided that we needed to evaluate every room in our home for any needed spiffing up and complete  those before my paychecks stopped. We methodically gutted and re-did the two upstairs bathrooms, gutted and re-did our kitchen,  upgraded our trim, replaced our air-conditioning unit and got all new windows.    In that way by my retirement date any room that needed a facelift, got one.

I must say, though,  that probably the most satisfying upgrade of all has not been on the inside of the house, but on the outside. One fall day about ten years ago, my husband and I were walking around our property, surveying our outside, checking what the exterior of our  house needed.    Painting?   New Roof?   Our neighbor joined us, I think, just to see what new ideas I could come up with.    My husband and I decided that it was probably time for the roof to be replaced since it was the original roof.     With that decision made,  I turned my attention to the deck on the back of the house.      Even with the western exposure  we certainly tried to use our deck,  but found that it grew almost uninhabitable during the mid afternoon in hot July and August, prime time for deck use. And then it  could also become unusable in the evenings as well because of insects. Hmmmmm.      As we walked around the yard, I morphed the conversation going from possibly installing an awning over the deck to maybe adding  a lower level of the deck to the existing structure outside the family room windows. Still I knew that this design, while attractive, fell way short of solving our core problems: the awning would help the sun issue, but would do almost nothing about the unbearable heat in mid-afternoon.    And the insect problem was still in no way addressed.    In my view only one option worked: since we were already going to be redoing the roof on the house itself, why not just extend it over the expanse of the current deck, screen it in, install a large white wicker ceiling fan over the table to create a breeze when none was available naturally. I also opted for a brick patio off the porch to add more entertaining space.    And for good measure, we decided that we should have the house painted, as well!    In for a dime, in for a dollar.  As I outlined the design of this space, my  husband just looked at me, familiar with the usual project creep that came with most of my renovations.

The space would be usable from April through October.   I stopped just short of the next obvious step: making  a true four season room out of it, the proposal of which would have sent my husband to irreversible apoplexy.   When we were finished with our planning that afternoon,  my neighbor just laughed and said, “Well, you just took  a $50,000 walk!”

But my husband had to agree that my plan was pretty much on target for solving the problem. So in March of 2008, we started work on redoing the back of our house. Our contractor had to be sure that the footings of the deck could uphold the new structure that would now include screened walls (and a screened floor to keep out the bugs!), a roof structure, and roofing itself. The deck was already the size and shape I wanted, about 18 feet by 22 feet, so a decent sized rectangle. 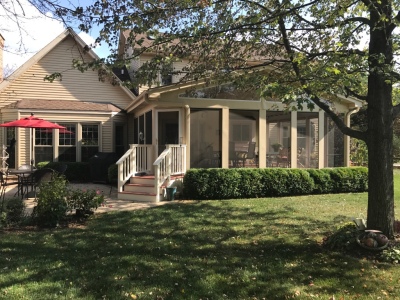 It would hold two seating areas on either end of the porch plus a table and chairs that would seat six under a large white wicker ceiling fan. The brick patio would come off the steps at the side of the porch.    The project was completed at the end of May that year, just in time for the prime summer season and to welcome our first grandchild, a boy,  that July!

Since its completion almost ten years ago, we have enjoyed any number of gatherings in the afternoons and evenings on our screened porch. It easily handles twelve to fifteen people with overflow drifting to the patio for more casual dining and gathering.   When we’re not partying out there, it is where I write, often where I meditate, or just sit out there and enjoy the flowers and the bird sounds.   The TV decorating shows  call places like this “a sanctuary,” or “an oasis.”    I always laugh at how la-dee-da that sounds but  I truly believe that is what our porch is to me – an oasis.   This space and the surrounding outside area has given us many seasons of pleasure, memories and fun with our family and friends.   I think is easily the most enjoyable re-do we have done in almost thirty years of living in our home.

And now as autumn will soon give up its delightful weather, at the end of October we will close down our porch for another year.   We will cover the furnishings, bring in our pottery, store away the toys until next April when I will do my happy dance as we bring it all back together and alive again!

This week is the one year anniversary of my blog.  I posted my first entry on October 3, 2016.   I  want to thank you for reading it.   I truly hope you enjoy reading it as much as I enjoy writing it!