I’m sure many of you will be able to identify with the Sundays I’m going to describe from my childhood. I think for many of us  during the 1950’s and ’60’s, before schedules got turbo charged, Sundays were family time, first and foremost. My Sundays, growing up, meant going to Mass in the morning and then going to my Italian grandmother’s house for a get-together in the afternoon. As I mentioned in an earlier blog post, my mother, father and I lived together with my Slovak grandparents whom I adored and who just doted on me, until I was ten. So I saw that much-smaller side of my family, including my mother’s brothers, almost every day.

But it’s those Sundays and the dynamic of growing up part of a very large ethnic family in mid-century America that I’m writing about this time. I think it’s a story that resonates among a vast swathe of the baby boom, no matter what the nationality. Nana, my father’s mother, had been having children from 1906 to 1931, ultimately having 13 children, not totally unusual for Italian families in those days. With my grandfather’s death in 1939, she became the matriarch of this large, and still growing, clan. By the 1950’s Nana’s children were all married and had children of their own. Some of my father’s siblings – 4 of them – had moved from Pennsylvania, to California, Utah or Nebraska. But, when you consider my father’s 9 other siblings, their spouses and children, that still left a large contingent in our hometown to gather on Sundays.

My Italian grandparents on their wedding day

I’m not sure when I realized – but it was early in my life – that my father and his brothers spelled their last names in different ways. I have no idea how my father’s sisters spelled the name before they married. The family name was Piparato (this is the way my father, and therefore my mother and I, spelled it). My grandfather – the patriarch of this family – spelled it Piperata. There were at least three spellings that I was aware of: Piperata, Piparato, Piperato.

Thus the t-shirt at our 2016 family reunion!

How did this happen? The answer that was handed down to me is that whichever way the siblings’ teachers spelled it when they started school was what that child went with. I keep thinking about how we now work with our kids and grandkids to know their colors, shapes, numbers, the alphabet and how to spell their names before they start school. My grandparents were likely feeling very blessed, rightfully so, to keep all their children fed, clothed and housed, nevermind teaching them to spell their names. So it is very plausable in the early twentieth century that the first time they were taught to spell their names was from a teacher in school.

Sunday at Nana’s was sacrosanct. It was more of an open house than an actual dinner, although there was always pasta, salad, Italian bread to graze on whenever you arrived. I could always be sure that I would see at least a  number of my aunts, uncles and cousins. If I missed a cousin or two at Nana’s, I would see one of them in the school halls on Monday and they might say, “You weren’t at Nana’s yesterday!” “Yes, I was – just not when you were there!” It was the rare occasion that we missed Nana’s on Sunday. And every summer at least once, my Uncle John  would give Nana a break and have all of us out to this house for a cookout. In addition, we kicked off each year with a family gathering on New Year’s Day.  There was no need for a Piparato reunion back then!

I never gave much thought to being an only child growing up because of the presence of this large extended family. I took it for granted. And it was not unusual, especially as I got into older, childhood,  to bemoan having to go to Nana’s each and every week. But once that weekly obligation was removed, after my grandmother died and my father and some of his siblings had died and my cousins moved all over the country, not having Sundays at Nana’s gradually became a void, especially after having my own child who was part of the family. The family as I knew it was gone but I wanted my son to know the family of which he was a part. My son knew about them from stories I told and he had episodic first-hand experiences with the family: a few Sundays at Aunt Mary’s when Nana was still alive and living with my aunt; his pizza birthday party at Aunt Theresa’s Italian restaurant; his confirmation party at our house when both the Slovak side and the Italian side were invited. But it was hardly the constant presence I had and wanted for him.

The last reunion of the Piparato family had been in 1990 when one of my cousins pulled it together virtually singlehandedly. Unfortunately, I had been unable to attend that one but I kept the beautful follow up letter my cousin had written to all, whether we had attended or not, ending with the hope that a reunion would be an ongoing thing. It turns out that that reunion was the last time that so many of our aunts and uncles would be with us to attend.

I had been promoting the idea of a family reunion for a long time with several of my cousins. Most that I talked with were very interested but time went on and there had been no reunion. I was still working at the time and the reunion, even with my enthusiasm about it, always seemed to fall near the bottom of my to-do list. Then two years ago, after I fully retired, a beloved cousin passed away. Within minutes of hearing the news, another cousin called me and said, “We have to do this reunion. We need to bring all of us together again.” So that was our sad push to get this going. We formed a committee of three to spearhead the planning. We sent questionnaires out to cousins for whom we had email or regular mail addresses across the country. Were they in favor of a reunion? Would they attend? Where should we have it – back in Pennsylvania where the Piparato’s started in this country or somewhere else more centralized to make it easier for both East and West Coast cousins to attend? If they attended, how many from their family did they think would come: sons, daughters, grandkids – we wanted to go out to all generations. Would they be willing to help defray the cost?

Special cupcakes made and brought by one wonderful industrious cousin!

The response was great, in my opinion. There was so much enthusiasm for a reunion not only from our first cousins but particularly from my son’s generation – those who I believe felt like he does, that he’s heard the stories but wanted to see the family interact for real and in person. One interesting note that I pretty much expected was that the interest was essentially concentrated among the East Coast cousins, those of us that grew up in Pennsylvania with Nana and our family and experienced it week in and week out for our whole childhoods. The Piparato clan was well known in Easton, Pennsylvania when we grew up. My father and several of his brothers, and a number of my cousins gained reputations as major football or baseball stars in high school. Two of them went on to college on football scholarships; one cousin on a baseball scholarship. Their lore was such that they have been written up in books. Later, my father and a number of his siblings started well known businesses in town. So there was some cache in being a Piparato in that town in the years we grew up and one we all keenly felt. To this day, when I go back and visit a certain business in town that I have known most of my life, the owner who was a few years younger than my youngest uncles, tells his story of when he himself was a very good football player at the same high school my uncles attended. He tells me that his mother would say, “You’re a great football player, but you’re not as good as the Piparato’s!” And that was his mother saying that! His Italian mother saying that!
I imagine that because the West Coast cousins visited once a year or so, and then left, the dynamic between them and the rest of the family was totally different. I don’t know if their identity was caught up in being a Piparato as much as ours was. But possibly that’s an unfair assessment, because I didn’t interact with them as much as some of my other cousins did.
All I know is that from the time we sent out the first “what do you think about a reunion” survey, it was Katie bar the doors. Cousins – and many second and third cousins that I didn’t know – contacted us with great ideas, offers to help and expressing the sense that this is exactly what we’ve all been waiting for! It was remarkable!   We had cousins come from up and down the East Coast, primarily.   My family came from Chicago.   After years of talking about it, we were actually going to pull this off. 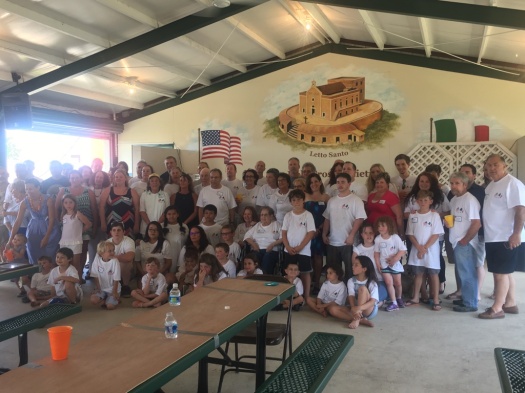 Those who attended our family reunion and made it the success it was!

On June 25, 2016, on a magnificently beautiful day, our Piparato family reunion became a reality: at a park in Easton, a park that has its own beginnings with the immigrant Italian Catholic families that came to Easton in the early 1900’s from a Sicilian town called Santo Stefano di Camastra. Our grandfather and about 80 of his Santo Stefano friends donated amounts of money that were very small by today’s standards – $1, $2, $5.  With these meager  contributions along with their local Italian parish, they eventually bought this land on which now sits a large picnic pavilion, a field where their great and great-great grandchildren were now playing frisbee and jumped in bounce-y houses; and a beautiful little chapel in which to pray and honor their memory, down the hill from where much of the Piparato clan is buried. Just one thought about visiting the cemetery: you see all those tombstones with all those memories, you say a prayer and as you’re walking away down the hill, you invariably have a smile on your face about some funny  family incident from long ago and all those different spellings of the name saved for posterity for all eternity: PIPARATO, PIPERATA, OR PIPERATO.

I would encourage you to have a family reunion if that is already not your tradition.  Whether there are 10 in your family or 300, it is so worthwhile for you, for your children, and their children to come together to share stories and confirm where you came from.   It’s a primal yearning I think we all have.   Our reunion was a total blast, and so satisfying on such a deep level,  and one we hope to replicate in another 2 years in our family.

Until we meet again…

2 thoughts on “COMING TOGETHER”