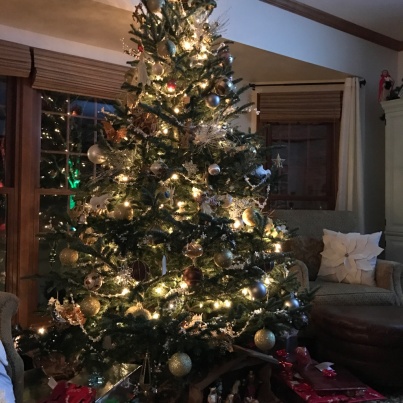 Christmas has always been very emotional for me. It’s about ethnicity and tradition and family and friends. My Christmases as a child were divided up between the Slovak and Italian families. Christmas Eve was always with my Slovak relatives and with my grandparents, whom I called Baba and Dzedush, in our house in Bethlehem, PA. Yes, it’s true, as a child, I spent Christmas Eve in Bethlehem! My aunts, uncles and cousins would come and we would have the traditional Slovak Christmas Eve dinner. My cousin, Louann, reminded me the last time we talked that she remembers that we never ate dinner – either Easter or Christmas – in the dining room, always at the big table in the kitchen. And that’s true. Even when my parents and I moved to another house when I was 10, we always came back to Bethlehem for Christmas Eve. The last Christmas Eve we had together in my grandmother’s house was in 1967.

Christmas Eve is the most important day of the Christmas season for Slovaks. It was the beginning of the Christmas season which then lasted until January 6, the feast of the Three Kings, the Epiphany. Our Christmas Eve dinner was steeped in tradition and from earliest childhood to now, it has always been magical to me – much more so than Christmas day. The meal consisted of 12 courses commemorating the 12 Apostles and it never started until the first star could be seen in the sky (on cloudy nights, I guess we made some assumptions about the stars being there!). What I remember most about this meal is  her Christmas Eve mushroom soup and the Oplatky, the blessed wafers Baba would get at church. The rectangular white wafers were embossed with the Nativity scene and were blessed by the priest before being brought home. Each of us had our own wafer at our place at the table. Dzedush would say a prayer and each of us would break off a piece at various times throughout the meal and dip it in the small dishes of honey at each of our places and eat it.

The mushroom soup was almost black, very dark brown. It was made from mushrooms that Baba picked in the woods in the hills above our house in June and dried behind her stove until the soup was ready to be made in December. Obviously, Baba knew what she was doing when picking the mushrooms – none of us every got sick from them. The soup was made of the mushrooms, onions, sauerkraut juice and was pretty sour – I won’t deny that it is probably an acquired taste to most people but I loved it from my earliest taste of it.
The rest of the dinner included nuts, fruit, bread, fried fish, potatoes – all of this symbolized abundance. For Slovaks, Christmas Eve was also known as Generous Day – that’s why many families gave presents on Christmas Eve rather than on Christmas Day. I, however, always got my presents on Christmas Day.

My cousin Jack always sang in the boys’ choir at his church, so, his parents, Aunt Anne and Uncle John and Jack would leave soon after dinner so that Jack could sing. I remember he told me that he had a solo in Adeste Fideles (“O Come All Ye Faithful”) and every time I hear that song to this day, I think of Jack. 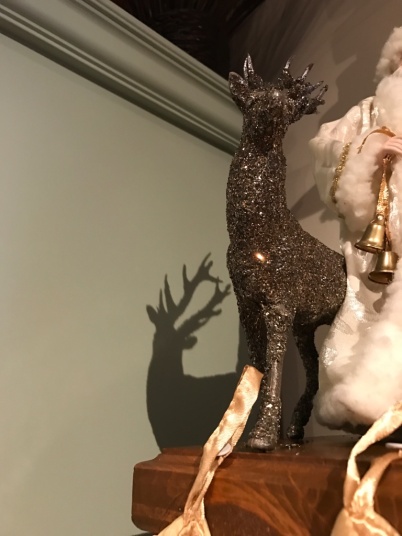 I remember one Christmas Eve when I was very little, maybe 5, waking up and going to the bathroom. Our bathroom window was carved glass so you couldn’t see clearly through it and as I looked outside, I saw antlers! Santa was coming! I was so excited! As I got older, I came to realize that what I saw were branches from Baba’s tree in the yard distorted by the glass  – but the memory still warms me.    And somewhere deep inside of me, there’s always been a part that still holds on to some level of belief…..

On Christmas morning I would wake up and find a stocking hanging on my bedroom door knob (we had no fireplace in that house). In the stocking were walnuts, oranges and small toys. My bigger toys awaited under the tree downstairs.

After we attended mass in the morning, Christmas Day was spent with Nana (not “Nonna” as is the accurate word for grandmother in Italian; my family always called my Italian grandmother “Nana”) and my large Italian family. Tons of cousins, aunts and uncles packed into Nana’s house, eating, singing, shouting, laughing, reminiscing. The traditional meal at a southern Italian Christmas Eve table includes Seven Fishes. Italian families all over the world gather together for La Viglia di Natale—the Christmas vigil—where fish is on the menu instead of meat. Also called The Feast of the Seven Fishes, the ritual of La Viglia has been handed down from generation to generation over the centuries. I never spent a Christmas Eve with my Italian family because we were always in Bethlehem. I do know that there were many different kinds of  fishes eaten, and, I’ve been told, it often involved eel.

Legend has it that the tradition of the “sette pesci” (“seven fishes”) started in Italy’s southern regions  like Naples and Sicily and is little known in northern Italy. Though many facts surrounding the feast are unknown, there are two definite truths: It’s about seafood and family. As more and more Italians migrated to America, they brought this tradition with them. Observing “Cena della Vigilia,” or the Christmas Eve dinner, started when Catholics fasted to anticipate the birth of the baby Jesus on Christmas Day. The fast would end when they received Holy Communion during Midnight Mass. Since meat cannot be eaten during the fast, Italians indulged in seven different types of fish. (As Mario Batali has famously said, “It’s what Italians do when they say they are fasting.”).
Apparently there are no hard and fast rules about which fish need to be included. Only this one rule: Seafood should be prepared and consumed on Christmas Eve. Preferably with wine. No problem there! 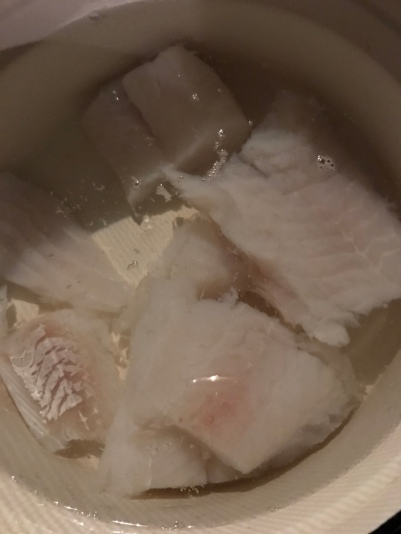 Those of us with origins from southern Italy generally have bacala which is  cod soaked in water (which we change frequently)  for about three days to remove the salt (we’re in the salt-removal process now in our family)  and then fried and served in a red sauce. Some people cook seven courses; some choose to make 12 (again as with the Slovaks, in deference to the 12 apostles). Some, like me, have been known to put a bunch of seafood in a stew and call it a day. I have done that but I prefer the idea of the drama and comaraderie of a number of courses.

OLD TRADITIONS GIVE WAY TO NEW ONES……
As my friend said so eloquently  in her recent blog, time goes on and children marry or leave the nest, and we parents need to learn to exercise our flexibility muscle (Visit http://www.ivyandironstone.com). New families enter our circle so that Christmas Eves are not always celebrated around our table, or even together, but yet  somehow they are all memorable. There have been times when we have traveled to be together such as the first Christmas that we had our first grandchild. We traveled to Santa Fe, New Mexico so that my daughter-in-law could also share Luke’s first Christmas with her family.    I will always remember walking Canyon Road with all the luminaria, the singing of carols and the fires in drums lighting and warming our way. There have been other Christmases when our son and daughter-in-law were with her family in other parts of the country and so my husband, mother-in-law and I have celebrated Christmas on our own in places like Williamsburg or New York City.

This year, I am thrilled to be hosting Christmas weekend with my son, daughter-in law and grandkids, and a niece and my mother-in-law, all  staying with us in the ‘burbs. The weekend will kick off with us going to see the Illumination at the Morton Arboretum on Friday, the 23rd. Christmas Eve will be busy throughout the day. Hopefully there will be enough snow left so that the grandkids can go tubing or sledding nearby. Then we will all gather around our table for our Christmas Eve dinner. My dinner this year will consist of an antipasto (served with a side of anchovies for those, like me, who like that particular  fish – I usually have the anchovies all to myself!). Interspersed throughout the meal,  we will have shrimp cocktail, an octopus side dish (don’t grimace: in our family, most of us love octopus, including, unless his tastes have recently changed, my 8-year-old grandson!). And for the few of us who like bacala, we will also have small portions of that fish. So that will give us Four Fishes. We will have chicken soup,  beef tenderloin, broccoli rabe and twice baked potatoes for the main courses (the fasting part of the tradition has long since left our table!). For dessert, we will have something light: homemade cookies and possibly small cannolis. A number of us will then go to the 10:30 p.m. version of Midnight Mass which is the time it is typically done  in the ‘burbs.   Upon returning from mass,  some of us stalwarts will watch Alistair Sim as Ebenezer Scrooge in the 1951 version of “A Christmas Carol” (the only version that has any real credibility in our family).   Christmas morning there will be presents and breakfast and fun and togetherness.

Until next time, I wish all of you have a peaceful, lovely Christmas that is filled with love and laughter.